In January 2019, Ocado, in partnership with Gasrec, opened the UK’s latest CNG (compressed natural gas) refuelling station. The Hatfield facility, built to support Ocado’s growing fleet of 29 gas-powered HGVs, has enabled Ocado to achieve a 29% CO2 emission reduction compared to the business’s diesel HGVs. In addition, Ocado have reported that the CNG dispensed from the station has secured a 12pence per kilometre saving. https://www.linkedin.com/feed/update/urn:li:activity:6475820382942306304/

The fuel dispensed at the facility is offset by government certified renewable biomethane under the Renewable Transport Fuel Obligation (RTFO) which allows Ocado to achieve a greater CO2 reduction than with fossil gas alone. A fully offset gas supply would be able to achieve an 84% CO2 emission reduction. 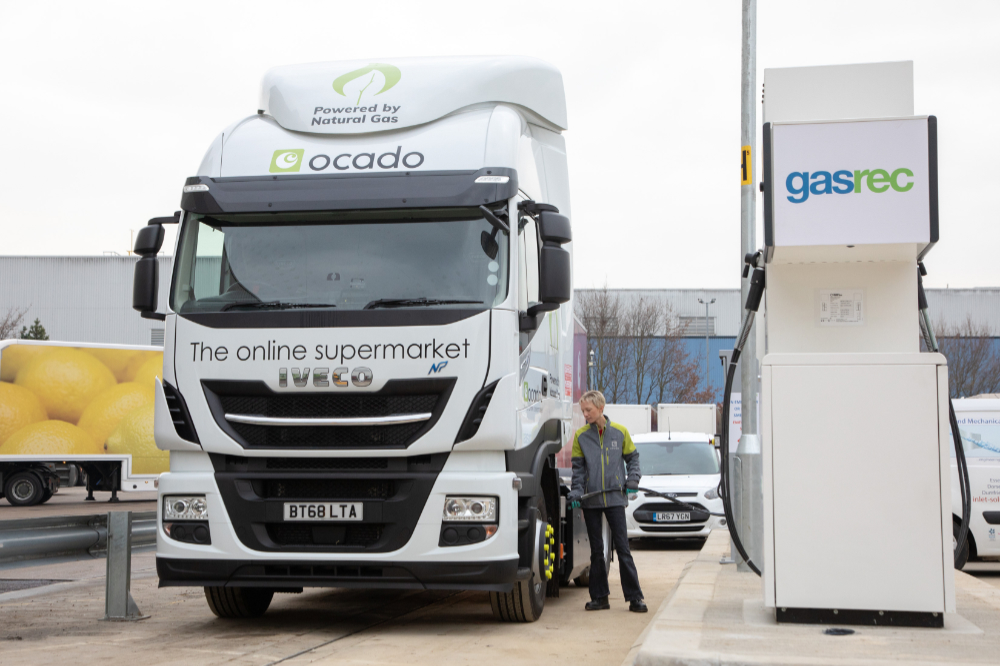 Ocado’s Fleet Services Manager, Graham Thomas, said: “We’re future-proofing our fleet and our business. Emissions from CNG are cleaner than Euro VI standards which start to take effect with the London Low Emissions Zone from April and will soon be followed by a further 32 Clean Air Zones.”

The station can support up to 80 gas vehicles using two double-sided CNG dispensers and was designed with 50% latent capacity should Ocado continue to expand their gas fleet beyond that number.

CNG for HGVs is a growing sector within the transport industry and gas vehicles now make up 10% of the UKs two-axle HGV market. Retailers such as Waitrose, Argos and John Lewis are utilizing the fuel in their HGV fleets, with the latter committing to go 100% gas by 2028. Logistics companies and parcel carriers such as Howard Tenens and Hermes have also committed to expanding their use of the fuel going forward.

This website uses cookies so that we can provide you with the best user experience possible. Cookie information is stored in your browser and performs functions such as recognising you when you return to our website and helping our team to understand which sections of the website you find most interesting and useful.

Strictly Necessary Cookie should be enabled at all times so that we can save your preferences for cookie settings.

If you disable this cookie, we will not be able to save your preferences. This means that every time you visit this website you will need to enable or disable cookies again.

This website uses Google Analytics to collect anonymous information such as the number of visitors to the site, and the most popular pages.

Please enable Strictly Necessary Cookies first so that we can save your preferences!